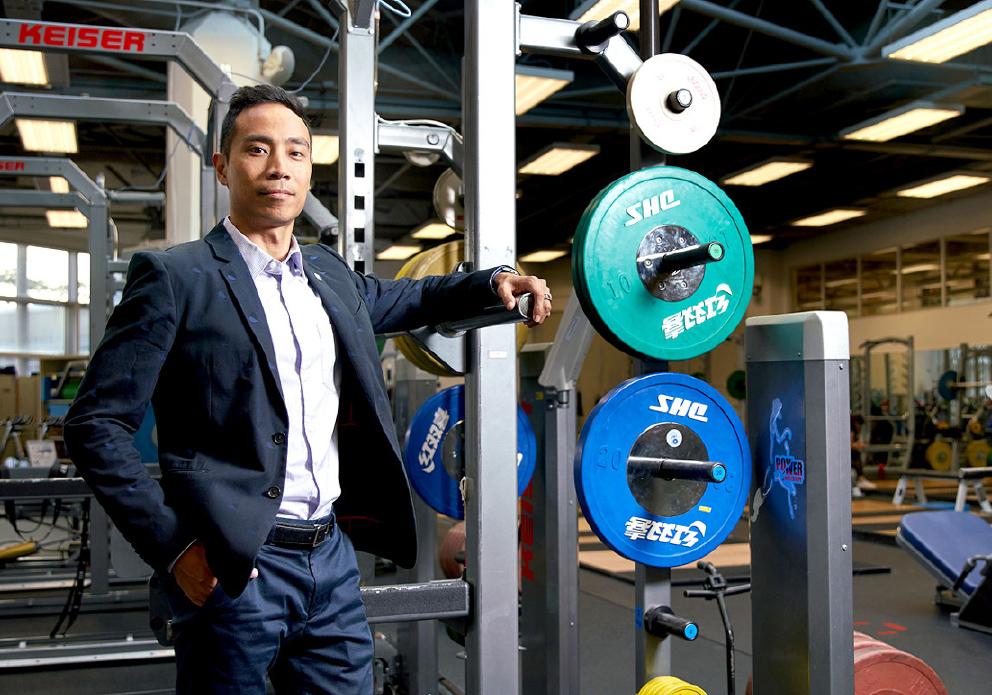 Mention Daniel Lee Chi-wo and the image of a ‘superhuman’ sportsman springs readily to mind. As a famed triathlete, he is often photographed in sportswear by the media. However, for this interview, he turned up smartly in a suit. Following his recent completion of a PhD programme, he is now employed with the Hong Kong Sports Institute as an Associate Director, Elite Training Science & Technology.

After graduating from CUHK’s Department of Sports Science and Physical Education in 1999, he became a full-time athlete and went on to win numerous triathlon events. Among others, he clinched a silver in the 2006 Doha Asian Games, a bronze in the 2009 National Games of China, and a gold in the 2008 Asian Beach Games. In 2007, he came in sixteenth at the World Championship, ranking top among Asian athletes represented at the event.

While he has won multiple medals, Daniel admitted he came back empty-handed from 90% of the triathlon events he took part in. For triathletes like him, the endurance training that has to be gone through is gruelling. So, has he ever thought of giving up?

‘Of course, I have. Many times, when my performance fell short of my own expectations or my coaches’ demands, I thought of giving up. But I loved the sport too much to quit. I always wanted to surpass myself and win more medals. So, I kept going.

‘Sports has taught me there’s no short cut to success. Triathlon demands hard and consistent training over a long period of time. I have been involved in full-time triathlon training and competitions for 10 years. And it has been more than two decades since I took up the sport, which has taught me how to face defeats and strive for excellence.’

Another benefit of physical activity is stress relief. ‘I usually swim, cycle and jog to destress. Although I seldom compete in contests now, I still exercise weekly to keep myself healthy.’ 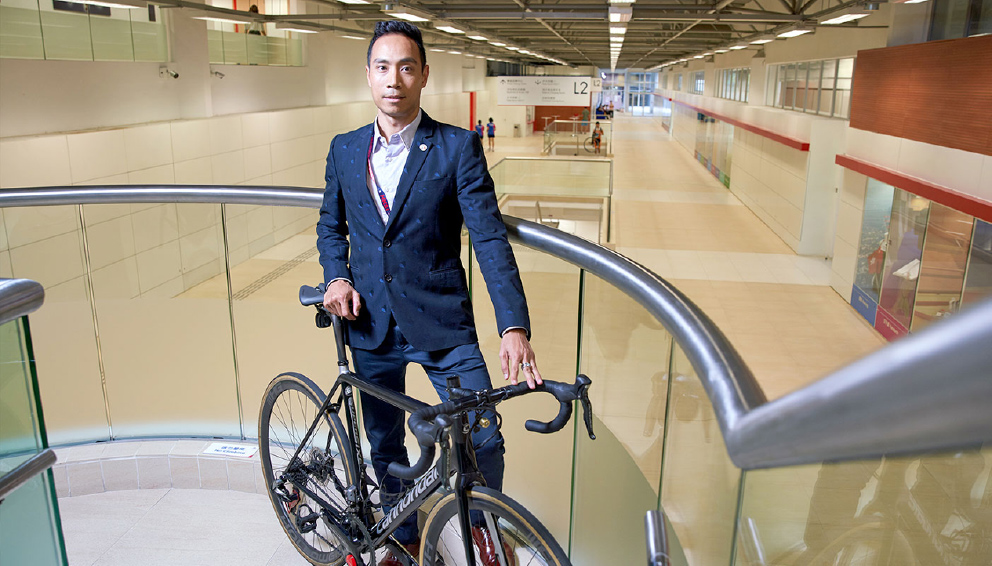 Quitting his professional sports career in 2011 left him wondering what he should do next. He found employment with a bicycle shop and became a product manager in charge of procurement and sales. Soon he became acquainted with many cycling enthusiasts. In 2012, he returned to his alma mater to become an assistant lecturer in the Department of Sports Science and Physical Education. Two years later, he was promoted to lecturer.

In this teaching position at CUHK, he taught students aspiring to become physical education teachers in primary and secondary schools. Daniel felt he benefited immeasurably from the regular exchanges he had with them.

‘Triathlon training doesn’t require much communication with others. But it is different in the education sector. Exchanges with students are a must and in my years as a teacher at CUHK I learned many slang terms and how to express myself more effectively to arouse students’ learning interest. I also learned to communicate with my colleagues better.’

Daniel commenced a PhD programme in 2014. ‘The courses I took then was valuable to my daily lecturing and research work.’ It also strengthened his emotional bond with CUHK, where he received his tertiary education from bachelor to postgraduate levels. ‘CUHK provided me with an all-round education. I got to know how I should train, learn and work to perfection. I also treasure the memory of many pleasant experiences I had on campus.’

The thesis topic he worked on was about compression sport garments, requiring him to find out if such garments could enhance athletic performance. After measuring the blood circulation levels of his subjects with supersonic technology, he found that compression sport garments could facilitate the physical recovery of athletes and enhance their sports performance considerably.

Doing a PhD part-time was no easy task but he managed well. From 2013 to 2019, he lived in a hostel on campus for easy access to the university’s laboratories. His thesis supervisor, Prof. Stephen H.S. Wong, also happened to be his work supervisor. He worked late nights and spent his weekends poring over books and writing his dissertation. For all this hard work, he was awarded a doctoral degree in 2019. 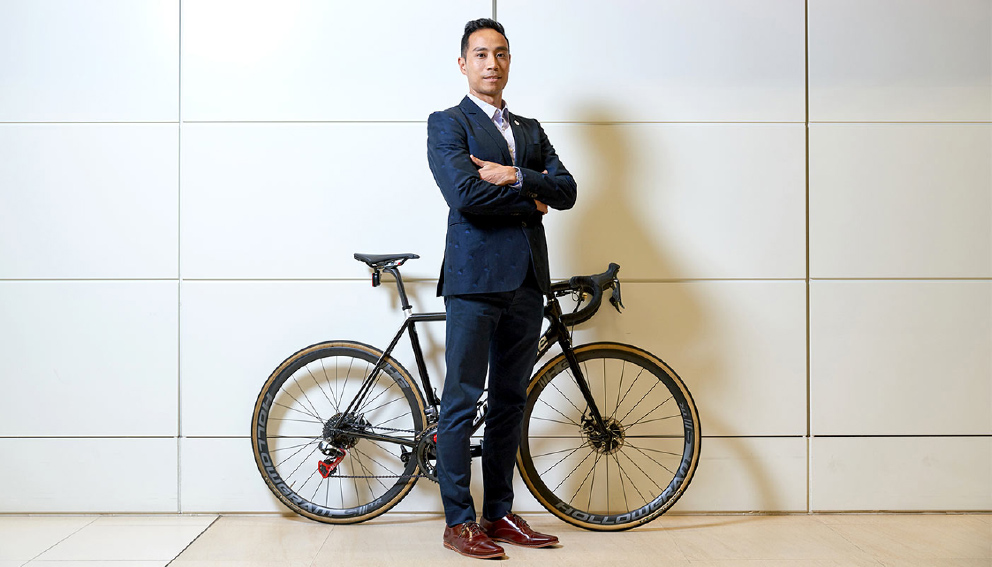 Shortly after getting a PhD, he saw a recruitment advertisement for the post of Assistant Director, Elite Training Science and Technology, placed by the Hong Kong Sports Institute. He applied for the position and was eventually appointed. He commenced work with the Institute only recently, in mid-August.

Daniel’s current role is to provide training support for athletes. He also does administration work at the Institute, including preparing its annual work plan and budget. Asked how technology could be tapped to help athletes, he reeled off two examples of its application.

‘We develop and make use of apps to monitor athletes’ heart rate changes and synchronize them with sports performance indicators. This enables sports coaches to offer immediate feedback. Take billiards for another example. In this table game, the precision and stability of the players’ every move matter a lot. Drawing on technology, we can capture their smallest movements for scientific analysis and review their movements’ stability.’

He hopes more advanced technology will be introduced to support the training of elite athletes and enhance their performances while optimizing the Institute’s efforts at grooming the next generation of sporting talents.

Daniel’s love for triathlon has brought him more gains than he ever imagined. Besides a robust physique, he has reaped enviable honours and academic achievements, and developed a fighting spirit that prepares him well for greater challenges and accomplishments ahead.

This article first appeared in CUHK Website in Apr 2019, reprinted with permission from Information Services Office, The Chinese University of Hong Kong.